In 12th and 13th century Europe, both population and economy flourished. Successful trade contributed to the development of cities. In the mid-13th century, a union of North German cities, known as Hansa or Hanseatic League, came into being. The Hansa developed mainly in the Baltic Sea basin, monopolizing trade, boosting economic development and acquiring considerable political influence. The league was soon joined by merchants of Polish coastal towns and cities such as Szczecin, Koszalin, Kołobrzeg, Gdańsk and Elbląg. In the 15th century, the Hanseatic League grouped 160 cities of the Baltic states, with the rapidly developing trade exchange at the base of their economic power. Szczecin and Gdansk hold the leading position among Polish cities. Very well preserved monumental buildings and richly ornamented burgher houses are the best evidence, of the cities’ and its merchants’ past puissance. 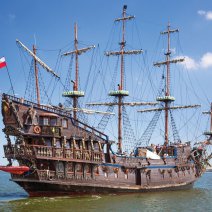 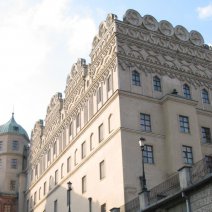 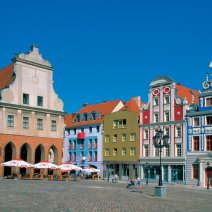 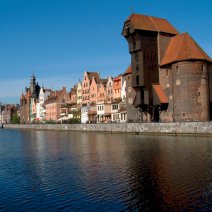 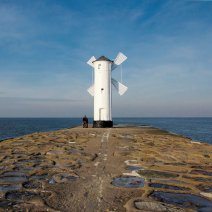 Arrival in Szczecin or Warsaw, domestic flights from Warsaw to Szczecin are available. On request, dinner can be arranged at a restaurant with typical maritime cuisine. Overnight in Szczecin.

The day starts with a city sightseeing tour of Szczecin. On the Market Square, you will find a remarkable town hall built in 1245. Opposite, there is the Loitz family house, built 300 years later. The Loitz family was a dynasty of bankers and had its own fleet when Szczecin was a member of the Hanseatic League. After a visit to the Harbor Gate, Maiden’s Tower and Gothic Cathedral of St James, you will admire the Castle of the Pomeranian Dukes. 200 steps lead you to the top of the tower, where you can enjoy a breathtaking panoramic view. For lunch, we suggest a famous restaurant on a boat. In the afternoon, free time for individual visits or for participation in one of our add-in-programmes which includes a lunch boat cruise on the Odra river and through the harbor. Overnight in Szczecin.

Drive to Kołobrzeg, a well-known seaside resort and spa. A city sightseeing tour of Kołobrzeg. The city was a member of the Hanseatic League at the turn of 14th  and 15th centuries, when the collegiate church and the neo-Gothic Town Hall was built. Via Słupsk and Koszalin, both of the cities members of the Hanseatic League in the past, you will reach your hotel in Gdańsk. Overnight in Gdansk.

Gdańsk was a very strong member of the Hanseatic League and between 1361-1669 played a leading role in the union. The historical city center is divided in two parts. Nine of the main town’s streets crossed by numerous little streets open to the River Motława through historical gates. The heart of this district is the Royal Way, running from the Upper Gate to the Golden Gate, and further down Long Street and Long Market to the Green Gate. To complete the sightseeing tour, we suggest a visit to Artus Court or Maritime Museum. On request, we can book lunch at a very typical restaurant in the Old Town, arranged in the Gdańsk style. In the afternoon, individual visits or a boat cruise through the harbor with Crane Gate. Overnight in Gdańsk.

On arrival in Toruń, our guide will take you for a city sightseeing tour. Toruń is registered on UNESCO’s list of World Cultural Heritage. In the Middle Ages, the city was very powerful and became a member of the Hanseatic League, although the sea is far away. Founded in 1223 by the Teutonic Knights, the city is home to many splendid examples of historical architecture. The Old Town Hall combines Gothic as well as Renaissance elements. In the afternoon, the birthplace of Nicolaus Copernicus is open for visitors. Optionally, we can arrange a boat cruise on the Vistula river. Overnight in Toruń.

Breakfast and departure from Toruń or transfer to the Warsaw International Airport.